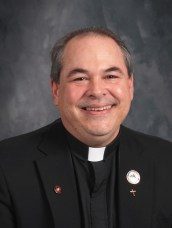 Fr. Stephen Thompson is a priest for the Diocese of Springfield in Illinois. He was ordained in May 2010 and assigned to the Cathedral of the Immaculate Conception in Springfield as Parochial Vicar. In July of 2012 he was assigned as Pastor of Holy Family Parish in Mt. Sterling, Illinois and St. Thomas Parish in Camp Point, Illinois. He was born in San Antonio, Texas on February 10, 1971, but raised for over 40 years in Wood River, Illinois. He graduated from East Alton Wood River High School in 1989. He is a veteran of the United States Marine Corps and was stationed at Camp Pendleton, California for four years from 1990-1993. He also participated in the first Gulf War in Desert Shield and Desert Storm. Upon completion of his military service he attended Southern Illinois University at Edwardsville studying Accounting and Business Administration. He also attended ITT Tech in Missouri where he received an Associate Arts Degree in Computer Networking Technology. He attended Conception Seminary College in Missouri from 2004-2006 receiving a Bachelor’s Degree in Philosophy and a Minor in Business Administration. He attended Mundelein Seminary in Chicago from 2006-2010 and received a theological Master’s Degree in Divinity.